Glucose is the central energy carrier of the human metabolism. The brain and red blood cells are fully glucose-dependent. The plasma glucose concentration (blood sugar level) is determined by the level of glucose production and consumption.

The following terms are important for proper understanding of carbohydrate metabolism A, C):

2.Glycogenesis, i.e., the synthesis of glycogen from glucose (in liver and muscle), facilitates the storage of glucose and helps to maintain a constant plasma glucose concentration. Glycogen stored in a muscle can only be used by that muscle.

3.Glycogenolysis is the breakdown of glycogen to glucose, i.e., the opposite of glycogenesis.

4. Gluconeogenesis is the production of glucose (in liver and renal cortex) from non-sugar molecules such as amino acids (e.g., glutamine), lactate (produced by anaerobic glycolysis in muscles and red cells), and glycerol (from lipolysis).

5. Lipolysis is the breakdown of triacylglycerols into glycerol and free fatty acids.

6. Lipogenesis is the synthesis of triacylglycerols (for storage in fat depots).

Islets of Langerhans in the pancreas play a primary role in carbohydrate metabolism. Three cell types (A, B, D) have been identified so far (^ p. 273 B). 25% of all islet cells are type A (a) cells that produce glucagon, 60% are B (|) cells that synthesize insulin, and 10% are D (6) cells that secrete somatostatin (SIH). These hormones mutually influence the synthesis and secretion of each other (^ p. 273 B). Islet cells in the pancreas head synthesize pancreatic polypeptide, the physiological function of which is not yet clear. High concentrations of these hormones reach the liver by way of the portal venous circulation.

Function. Pancreatic hormones (1) ensure that ingested food is stored as glycogen and fat (insulin); (2) mobilize energy reserves in response to food deprivation, physical activity or stress (glucagon and the non-pancreatic hormone epinephrine); (3) maintain the plasma glucose concentration as constant as possible (^ A); and (4) promote growth.

Synthesis. Insulin is a 6 kDa peptide (51 amino acids, AA) formed by the C chain cleaved from proinsulin (84 AA), the precursor of which is preproinsulin,a pre-prohormone. Insulin contains two peptide chains (A and B) held together by disulfide bridges Degradation: Insulin has a half-life of about 5-8 minand is degraded mainly in liver and kidneys.

The insulin receptor is a heterotetramer (a2|2) consisting of two extracellular a subunits and two trans-membranous | subunits. The a subunits bind the hormone. Once the | subunits are autophosphory-lated, they act as receptor tyrosine kinases that phosphorylate insulin receptorsubstrate-1 (IRS-1). Intracellular proteins with SH2 domains are phospho-rylated by IRS-1 and pass on the signal (^ p. 277 C3).

Action of insulin (^ A, B, C). Insulin has anabolic and lipogenic effects, and promotes the storage of glucose, especially in the liver, where it activates enzymes that promote glycolysis 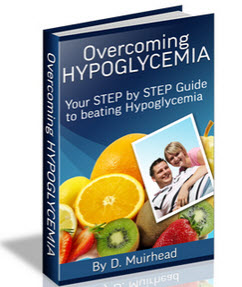 How I Healed my Hypoglycemia

How to Cure Diabetes and Get Off Insulin, How to Lower Your Blood Sugar with Natural Diabetes Treatmen, Low Blood Glucose, Blood Sugar Level, Popular Diets and Problems in Human Metabolism