The noninvasive techniques that evaluate transit of solid particles of the same size through the stomach, small bowel, and colon provide reliable assessments in the majority of patients with common GI symptoms such as nausea,vomiting, abdominal pain, diarrhea, and constipation. There is likely to be a significant growth in the application of these methodologies in the near future. The combination of transit measurements within one study limits radiation exposure, and by optimal use of personnel and equipment, leads to improved efficacy and reduction in costs.

The procedure to measure whole-gut transit in the unprepared state requires simultaneous use of two different radioisotopes.50,51 A methacrylate-coated capsule containing polystyrene pellets or activated charcoal labeled with 111In is ingested by the patient after an overnight fast. With a half-life of approximately 68 hours, 111In is preferred to 99mTc, which has a half-life of approximately 6 hours. Thus 111In is a superior marker for colonic transit because patients with colonic inertia may have very prolonged transit. Gastric emptying of the capsule is monitored by following its position relative to external radioactive markers placed over the patient's xiphisternum and both anterior superior iliac spines. After the capsule empties from the stomach, a standard 1260-kJ (300-kcal) breakfast meal consisting of scrambled eggs, whole wheat bread, and skimmed milk or apple juice is given. Polystyrene pellets labeled with 99mTc are mixed with the egg, which is cooked to a firm consistency. For lunch and dinner, standardized meals are given 4 hours and 8 hours after the breakfast meal. Ordinary physical activity is allowed during the test. Anterior and posterior gamma camera images (2-minute acquisitions) are acquired with patients in an erect position.

In research studies, these images are obtained at regular intervals for 12 hours, and a final image is obtained 24 hours after ingestion of the radiolabeled breakfast. Using a variable region-of-interest program, 99mTc is measured in the stomach and large bowel and 111In is measured in four regions in the colon (ascending, transverse, descending, and rectosigmoid). Corrections are performed for isotope decay and Compton scatter from the 111In to the 99mTc window. Gastric emptying is summarized by calculating the duration of the lag phase and the slope of postlag emptying.21 Small-bowel transit time is estimated by subtracting the time for a proportion (10% or 50%) of isotope to empty from the stomach from the time taken for the same proportion to enter the colon.20 Overall colonic transit is evaluated by the geometric center, that is, the weighted average of the proportions of counts in each colonic region at 4 hours, 12 hours, and 24 hours.50,51 For this analysis, each colonic region (ascending, transverse, descending rectosigmoid, stool) is given a number from 1 to 5 as a weighting factor. The proportion in each region is multiplied by the weighting factor, and the sum for the five regions calculated. Thus, a low geometric center implies that most radiolabel is closer to the cecum, whereas a high geometric center implies most radiolabel is closer to the stool. The proximal colonic emptying rate can also be plotted as an activity-time curve, since the start time of colonic transit is easily defined by this method. This approach has provided interesting observations in health and disease states, particularly regarding the importance of altered proximal colonic transit in severe constipation and in irritable bowel syndrome with diarrhea (Fig. 7.10).

Simultaneous colonic transit measurements have also been compared in idiopathic constipation patients using a radiopaque marker method simultaneously with scintigraphy.34,47 The mean transit times through the ascending and transverse colon for radiopaque markers (6 mm average size) were significantly faster than the time for 50% of radiolabeled pellets (1 mm average size) to empty from these combined colonic regions.47

In clinical practice, the sequence of measurements and calculations used in research is far too laborious. Hence, a simplified routine has been validated in the authors' laboratory. Selected scintigraphic observations made within the first 6 hours after ingestion of the 99mTc-labeled solid meal were compared with the results of more detailed analyses requiring multiple scans. The data showed that in patients with neuropathic and myopathic motility disorders, the proportion of radioisotope retained in the stomach at 2 hours, 4 hours, and 6 hours could differentiate health from neuropathic and myopathic motility disorders at a sensitivity greater than 90%, with a specificity of 78%. These accuracy figures are

comparable to those of more detailed analyses.52 A similar approach has been developed for colonic transit measurements, and recently, the validity of this method relative to clinical results has been shown in several clinical trials using alosetron, a 5-hydroxytryptamine (5-HT3) antagonist,53 and tegaserod, a 5-HT4 agonist.54,55 The scintigraphic measurements at 4 hours, 12 hours, and 24 hours after ingestion of the delayed release capsule (Fig. 7.11) discriminate

Figure 7.11. Geometric center of colonic isotope after 4 hours, 12 hours, and 24 hours in disorders of colonic transit.

health from disease states associated with accelerated or delayed colonic transit.52 These data appear to justify the authors' preference for the scintigraphic approach over the more widely used radiopaque marker methods in conditions associated with rapid colonic transit, since radiopaque markers may have already passed through part or all of the colon at the time the abdominal radiograph is taken (day 4). A more accurate evaluation of rapid colonic transit could certainly be achieved using radiopaque markers by increasing the frequency of abdominal radiographs,but this would require an unacceptable increment in radiation exposure. These scintigraphic measurements involve limited radiation exposure (Table 7.3), permitting repeated evaluation to monitor the progress or efficacy of treatment.

Everyone has an upset stomach from time to time. You probably know the sort of thing I mean – sometimes you’ve got gas and at other times you feel queasy or nauseous. There may be times<br />when you can’t seem to go to the toilet for days, constipated as can be, but there are other days when diarrhea strikes and you can’t stop going! 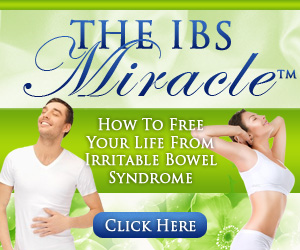 How To Get Rid of Irritable Bowel Naturally