Indications for UPPP in Snoring 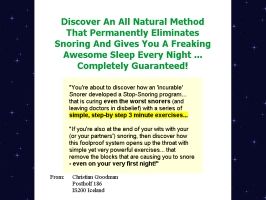 UPPP is highly effective for the treatment of snoring. The suc cess rate of this technique has ranged from 76% to 94%, and, in most series, is greater than 90%.23 Although highly efficacious,

UPPP is associated with considerable morbidity and thus is fre quently unacceptable to many patients. It requires a general anesthetic and hospital admission, often to the intensive care unit. Postoperative pain is moderate to intense and often unremitting for days; in most cases, a narcotic is required for days, and often weeks. Complications can be significant and include death secondary to airway obstruction, hemorrhage, velopharyngeal insufficiency, voice change, and foreign-body sensation.1

The significant morbidity associated with UPPP has led to attempts to develop procedures that are as effective as UPPP at alleviating snoring, but with fewer side effects and less postop erative discomfort. One procedure, laser-assisted uvulopalato-plasty (LAUP), was introduced in 1993 as a treatment for snoring; intensely publicized, its use proliferated rapidly. Response rates appear to be comparable to those for UPPP.23 LAUP has a number of advantages over UPPP. It is an office-based procedure, performed without general anesthesia. Patients are not hospitalized and usually can return to work the same day as the procedure. It is safer than UPPP, with no cases of airway obstruction or death having been reported, to our knowledge. The risk of postoperative hemorrhage and palatal insufficiency is lower.24

Despite these advantages, LAUP is not without controversy. The standard LAUP requires multiple procedures to stiffen the palate and, as a result, the cost advantage over UPPP is marginal. However, one-stage LAUP is now being performed and preliminary studies report success rates comparable to those of standard LAUP.25 Furthermore, although LAUP was initially publicized as much less painful than UPPP, in our experience, patients who undergo LAUP experience moderate levels of pain and often require a narcotic for several days. Another novel procedure, somnoplasty or radiofrequency ablation of the soft palate, appears to be much less painful than UPPP and even LAUP. Preliminary studies suggest that somnoplasty is as efficacious as LAUP for snoring and may have a lower incidence of palatal incompetence.26

Finally, many patients with severe antisocial snoring may suffer from more serious sleep-related disorders and, if not correctly diagnosed, may be inadequately treated with LAUP. As many as 40% of patients with OSA documented by PSG report snoring as their only symptom.27 These patients are at risk of being misdiagnosed as nonapneic snorers. As a result, they may be offered a procedure such as LAUP that is highly efficacious for snoring, but of questionable benefit for OSA. Only a few studies have evaluated the efficacy of LAUP for treating OSA. In the largest trial of LAUP patients, in which pre- and post-treatment PSG were compared, Laurentano et al.28 demonstrated that mild to moderate OSA worsened and that severe OSA persisted after LAUP. Thus, patients with OSA who complain only of snoring may be inappropriately treated with LAUP. LAUP may delay the diagnosis of OSA by masking the only symptom and, in some patients, may worsen OSA.

Surgery for snoring has followed national trends in our department. Increasing numbers of patients are electing to undergo LAUP and somnoplasty, rather than traditional UPPP. All patients requesting surgery for snoring have a thorough preoperative clinical evaluation similar to that for OSA. Patients with marked tonsillar hypertrophy, redundant pharyngeal mucosa, or nasal obstruction requiring correction under general anesthesia are encouraged to undergo UPPP. All others are considered candidates for LAUP or somnoplasty. Although the American Sleep Disorders Association recommends that all surgical candidates for snoring procedures such as LAUP undergo PSG to screen for OSA, we do not believe that it is cost effective. However, all our candidates for LAUP or somnoplasty are informed of the risks of missing the diagnosis of OSA, and patients suspected of suffering from OSA based on the information obtained from the history and physical examination are encouraged to undergo PSG.

Is Snoring Ruining Your Life? Find A Cure For It Today! It's loud, it's disturbing and it's embarrassing during a sleep over. Snoring effects everyone around you and if you are one of the millions of people around the world who suffer from snoring, then you know how negatively it can affect your relationships. People who don't snore don't understand how bad it really is to snore. Going to bed every night knowing that as soon as you coast off into sleep you'll be emitting an annoying and loud sound that'll disturb everyone around you.