As a consequence to cardiac lymphatic obstruction, alterations have been reported in ECG resembling those observed in myocardial hypoxemia or in grave anoxemia .97 Similarly, elevated ST- and negative T-segments have been described in dogs.98 These pathological changes were attributed to the myocardial dilatation by the edema. Furthermore, cardiac arrhythmias have been reported similar to those found in sick sinus syndrome in man.87 Other investigators, however, did not observe changes in ECG following interruption of the cardiac lymph drainage.99100

Molecular pathways for lymphangiogenesis and their role in human disease

The lymphatic network functions to return fluid, cells and macromolecules to the circulation. Recent characterization of growth factors that control the growth and development of the lymphatics, and markers which specify lymphatic endothelial cells have enhanced our understanding of this system. Members of the VEGF family of factors are key regulators of these vessels with VEGF-C VEGF-D and VEGFR-3 being the best validated signalling pathways in lymphangiogenesis. The study of these molecules in various pathologies has shown that they are important in the processes of cancer metastasis and in the formation of lymphoedema. Knowledge of these molecular pathways allows for the generation of modulators of these pathways which could form the basis of novel therapeutic approaches. The lymphatic system is a series of vessels for transporting back to the circulation, the fluid, cells and macromolecules that escape from the blood vascular system. It is therefore an essential part of...

Subcutaneous soft-tissue infection can be divided into the superficial non-necrotizing type and the deep-seated necrotizing type. Cellulitis belongs to the former and necrotizing fasciitis the latter (Bisno and Stevens 1996). Some necrotizing infection is potentially life threatening, especially in children, requiring emergency surgical drainage, but non-necrotizing infection can be treated conservatively with antibiotic drugs. Cellulitis is the infection of subcutaneous loose connective tissue, with limited involvement of the dermis and relative sparing of the epidermis (Darmstadt 2000). An abrasion, scratch, break, or contusion of the skin predisposes to cellulitis. It more commonly occurs in patients with lymphedema or diabetes or in an immunosuppressive state. Streptococcus pyogenes and S. aureus are the main offenders. Necrotizing fasciitis is an infection of the deep layer of the fascia, usually sparing muscle.

Axial magnetic resonance image (MRI) with intravenous gadolinium contrast enhancement of the arm of a patient with cutaneous anthrax that demonstrates massive lymphedema and enhancement of the subcutaneous fat in the lateral compartment. (Courtesy of Carlos R. Gimenez, M.D., Professor of Radiology, LSU School of Medicine, New Orleans, LA.) 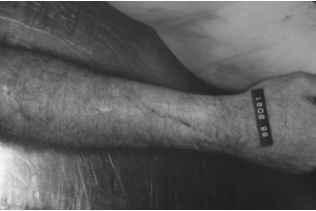 Round atrophic scars clustered predominantly on the arms and legs are frequently seen in intravenous drug abusers,4 particularly cocaine abusers. These may represent healed abscesses or healed ischemic ulcers due to the vasoconstrictive effect of cocaine (which is also directly toxic to capillary endothelium). More rarely encountered are dramatic instances of necrotizing fasciitis (Figure 2.1.2.5) whch may involve an entire extremity and be accompanied by a severe lymphedema, multiple surrounding ovoid scars, and cellulitis. In extreme cases, auto-amputation of the extremity may occur. The etiology of the fasciitis and the lymphedema is unknown.

Impaired cardiac lymph drainage inevitably causes myocardial edema as demonstrated by an increase in water content.34,85 Histological changes include interstitial edema, swelling of myofibrils, myofibrillar derangement, and mitochondrial injury.14,77,87'89 Additionally, there were described subendocardial and myocardial focal hemorrhages following cardiac lymphatic obstruction.89,90 But these were observed only occasionally and have not been confirmed in other studies.77,91 It is conceivable that the ultrastructural changes following insufficient cardiac lymph drainage reduce myocardial performance. Chronic interstitial edema is well known to cause interstitial fibrosis.92 Accordingly, the left ventricular myocardial collagen concentration was significantly higher in dogs with chronic myocardial edema in response to pulmonary artery banding (see below) than in normal dogs.34 With prolonged cardiac lymphatic obstruction, thickening of the endocardium with increased The coronary...

Cardiac lymphatic obstruction may be assumed to interfere with myocardial blood flow due to an increase in interstitial pressure, which then enhances coronary flow resistance. Indeed, when cardiac lymphatic outflow pressure was elevated so that lymph flow was abolished, interstitial fluid pressure rose from 15.0-27.5 mm Hg.37 Baseline coronary blood flow, however, was not significantly affected following cardiac lymphatic obstruction, whereas reactive hyperemia and adenosine induced vasodilation were reduced.95 96 Obviously, blood flow to the edematous myocardium was maintained on the expense of the coronary flow reserve. Consequently, an increased myocardial oxygen demand should not be met adequately by a rise in blood flow and myocardial ischemia would result.

Modified radical mastectomy involves removal of breast tissue, nipple and skin overlying this along with the axillary contents. The axilla has three levels of nodes. Level I is lateral to the pectoralis minor muscle. Level II is beneath pectoralis minor and level III is medial to pectoralis minor. In mastectomy only levels I and II are taken as metastasis usually spreads from levels I to III in sequential order. There has been no increase in survival with taking level III, but it does increase lymphedema. Pectoralis muscle is only removed if the tumor directly invades. In radical mastectomy, a surgery that is no longer preformed, the pectoralis is routinely removed. However, this proved to be more disfiguring without survival advantage. Sentinel node biopsy can determine the status of the axillary nodal basin using minimally invasive surgical techniques. The advantages of sentinel node biopsy include decreased risk of nerve injury and post operative lymphedema. This postoperative...

Erysipelas begins with the classic signs of infection. Areas of bright red erythema (rubor) develop in the form of sharply demarcated palpable plaques. If the margin edge is inked, spread beyond the markings is noted within a matter of hours. The area is palpably warmer (calor) than the adjacent skin and the involved area is either tender to palpation (dolor) or at the very least is hypersensitive to touch. Sometimes skin sensitivity is the earliest sign. Superficial vesicles or bullae are common. Hemorrhage into the blisters may occur, and in older patients hemorrhage into the intact skin is not unusual. Cellulitis also shows the classic signs of infection but there are subtle differences. The erythema is more of a pink rather than a bright red color, and the affected part has a feel of deeper doughy swelling. The margin of color change is indistinct and there is no clearly defined plaque. The afflicted area is palpably warmer than adjacent skin and the area is painful to palpation...

Signs and symptoms that suggest a mass is breast cancer until proved otherwise fixation of breast mass to the chest wall or overlying skin, satellite nodules or ulcers on the skin, lymphedema peau d'orange, matted or fixed axillary lymph nodes, inflammatory skirt changes (red, hot skin with enlargement of the breast due to inflammatory cancer), prolonged unilateral scaling erosion of the nipple with or without discharge (may be Paget's disease of the nipple), microcalcifications on mammography, and any new breast mass in a postmenopausal woman.

Inguinal pain limb or genital swelling skin exfoliation of the affected body part usually occurring with resolution of an episode recurrent episodes of inflammation and lymphedema leading to lymphatic damage with chronic swelling and elephantiasis of the legs, arms, scrotum, vulva, and breasts

CLINICAL PRESENTATION In 40 of cases the portal of entry may not be obvious. After an incubation period of several days the disease commences abruptly with fever, malaise, and sometimes mental confusion. A small erythematous patch at the infected site rapidly spreads. The erythema is irregular with extensions or tongues along lymphatic vessels. The clinical appearance of an elevated, erythematous, indurated area with a sharp border is very characteristic. The area is hot to the touch, and tiny vesicles may be seen at the advancing margin. The tense edema gives the skin a shiny glazed appearance and is sufficient to greatly distort the facial features. Local complications include hemorrhagic infarction, ulceration, and necrosis. Regional lymphadenopathy accompanies the infection. Chronic lymphedema is a possible sequel resulting from occlusion of lymph vessels. As with many streptococcal infections acute glomerulonephritis may develop later in the convalescent period.

Coronal magnetic resonance image (MRI) with intravenous gadolinium contrast enhancement of the arm of a patient with cutaneous anthrax that demonstrates massive lymphedema and enhancement of the subcutaneous fat in the lateral compartment. (Courtesy of Carlos R. Gimenez, M.D., Professor of Radiology, LSU School of Medicine, New Orleans, LA.)