The gyrate erythemas are a heterogeneous group of dermatoses clinically defined by the presence of circinate, annular, and/or polycyclic lesions that are often associated with serious underlying systemic diseases (1). The gyrate erythemas consist of the entities erythema annulare centrifugum (EAC), erythema marginatum rheumaticum (EMR), erythema gyratum repens (EGR), and erythema chronicum migrans (ECM). The latter two entities, namely EGR and ECM, are associated with potentially deadly underlying disorders and thus will be discussed in greater detail.

This distinctive dermatoses is the rarest of the gyrate erythemas with only 55 cases reported to date (2). Initially reported by Gammel in 1953 as a distinctive rash with a "wood-grain" appearance that appeared to move or "creep" (hence the Latin designation of repens), he correctly surmised its development in conjunction with underlying breast carcinoma and subsequent resolution with removal of the tumor.

Of the patients reported to date, there is a 2 : 1 male-to-female gender ratio with an average age at presentation of 66 years with most patients being greater than 40 years of age at diagnosis (3). All patients reported thus far have been Caucasian. Approximately 90% of patients possess an underlying malignancy, most commonly involving the lung and representing carcinoma. Lymphoreticular malignancy or sarcoma is seldom seen. Carcinoma of the breast, cervix, bladder, prostate, and kidney, among others, may also be seen (4). The rash usually precedes the discovery of the malignancy but may present concomitant with, or rarely, following the diagnosis of internal malignancy. Approximately 10% of the cases fail to show an internal malignancy and rare single cases of its association with pulmonary tuberculosis and the CREST syndrome have also been reported (5).

The pathogenesis of this disorder is unknown. Among the possible mechanisms postulated are immune mediated models in which cross-reactivity between tumor and endogenous skin antigens occurs, the tumor antigens bind in situ to endogenous skin antigens, or tumor antigen immune complexes circulate and deposit within the skin. Alternatively, the cytokine-rich milieu of malignancy may incite an abnormal localized inflammatory cell response resulting in increased matrix elaboration responsible for the observed clinical patterns and migration of the rash.

The clinical features consist of a pruritic rash with broad erythematous bands of polycyclic and arcuate arranged patches with a trailing scale that commonly assumes the appearance of wood-grain or marble (Figure 16.1). The lesions typically migrate at a rate of approximately 1 cm per day. The rash is usually located on the trunk and rarely involves the face or extremities. The most important diagnoses to exclude are ECM and EAC. In contrast to EGR, EAC generally produces more slowly evolving, palpable plaques that characteristically clear within the center. Although EAC may be associated with underlying malignancy, most cases are either idiopathic or follow drug hypersensitivity.

Histology shows epidermal spongiosis with surmounted scale-crust and exocytosis of lymphocytes (6). The dermis discloses a predominantly superficial perivascular lymphocytic infiltrate with interspersed eosinophils (Figure 16.2). Involvement of the deeper vascular plexus and abnormal collections of Langerhans cells have also been reported. Direct immunofluorescence may show granular deposits of IgG and C3 along the basement membrane (7). Laboratory abnormalities frequently include hypereosin-ophilia. Some patients have been shown to have abnormal numbers of circulating T- and B-lymphocytes.

Although the rash is itself innocuous, it is associated with underlying malignancy in the vast majority of cases. Many of the patients have advanced-stage visceral cancers at diagnosis and thus succumb to their underlying disease. However, a minority of patients, particularly those individuals discovered to have early-stage disease or less aggressive forms of cancer such as cervical carcinoma, may expect a favorable outcome and resolution of the rash following removal of the tumor.

Treatment should be principally aimed at timely diagnosis and removal of the underlying malignancy. Patients should undergo chest X-ray and CT scanning of the abdomen and pelvis, and should also be considered for esophagogastroduodenoscopy and colonoscopy. The rash

itself does not respond to topical or intralesional corticosteroid therapy. Most cases resolve with removal of the underlying malignancy.

This dermatosis is one of the more common examples of gyrate erythema that derives its name from the distinctive manner of its clinical presentation. Coined by Afzelius as erythema migrans in 1909, it was later designated by Lipschutz as erythema chronicum migrans (8). Both investigators rightly surmised the relationship between the expanding erythematous rash and an antecedent tick bite. The association between tick bite and the constellation of neurologic and rheumatologic symptoms, however, would not come until 1977, with a landmark epidemiologic study conducted at the time around the communities neighboring Lyme, Connecticut. Shortly thereafter, the disease vector (Ixodes tick) and the etiologic agent (Borrelia burg-dorferi) of Lyme disease, were determined.

ECM and Lyme disease afflicts persons of all ages and ethnic backgrounds, and with a nearly equal gender distribution. The disease has been reported across North America, Europe, and Asia and is the most common of the bacterial-borne arthropod diseases in North America. The common denominator for acquiring the disease is outdoor exposure or contact with the disease-carrying tick species Ixodes. Although most infections follow feeding with the hard tick Ixodes, infection following the bite of other tick genera and non-tick vectors has been reported. Human infection constitutes an exceptional event as the principal hosts of the infection are rodents, particularly the white-footed mouse, deer, and avian populations. The tick acquires infection with the spirochetal bacterial organism Borrelia burgdorferi following blood meal on an infected host and usually retains infectivity for life. Other cutaneous manifestations of Lyme borrelio-sis are Borrelial lymphocytoma and acrodermatitis chronica atrophicans (9).

The principal cutaneous manifestation of Lyme bor-reliosis is erythema chronicum migrans. The rash can initially be seen around the site of tick bite or may develop without the patient being aware of a previous tick bite (10). The rash typically follows an incubation period of 1 to 3 weeks but may occur as soon as 3 days following the bite or up to 3 months following exposure. The rash begins as a solid and slowly expanding erythematous patch that in time centrally fades, forming a distinctive annular appearance (Figure 16.3). Occasionally, the central site of the tick bite may persist as a small erythematous patch forming a bull's-eye-like or targetoid configuration. The erythematous band expands peripherally at a variable rate with the largest lesions generally occurring in individuals with the longest duration of symptoms. The band itself is generally between 1 and 2 cm wide and usually assumes a symmetrical annular pattern, although exceptional cases of eccentric or elliptical-shaped rings have been reported

(11). The rash has been rarely reported to form a scale or to vesiculate. The natural history of untreated cases is for gradual fading and complete resolution of the lesion within one year. The rash can develop anywhere on the skin surface with the lower extremities among the more common sites of involvement. Other signs commonly found in conjunction with the cutaneous manifestations include lymphadenopathy, and fever, additional complaints of headache, and malaise are common (12). Other less common cutaneous manifestations include the development of multiple erythema migrans lesions with secondary spirochetal dissemination, localized lympho-cytoma usually involving the earlobe, and the sclerotic bands and nodules of the lower extremities seen in acro-dermatitis chronica atrophicans. The latter entities are more commonly observed in Europe (13).

The histologic findings observed in Lyme disease are nonspecific and consist of a superficial or superficial and deep lymphocytic perivascular infiltrate with variable numbers of interstitial eosinophils and plasma cells (14,15). Spirochetes may be observed within the papillary dermis with the aid of the Warthin-Starry silver stain. Recent ancillary diagnostic methods incorporating the use of the PCR reaction and indirect immunofluorescence have also been reported. The diagnosis may be verified serologically by the demonstration of elevated IgM or IgG titers to B. burgdorferi. As outdoor enthusiasts often harbor antibody titers to the organism from previous exposure, borderline elevations in IgG antibody titers should be regarded with suspicion. Further compounding the limitations of serologic diagnosis are a lack of serologic standardization, low yield of the test in early infection, and false positive results in patients with relapsing fever and syphilis (16). Finally, Borrelia species may be cultivated using specialized media such as the modified Kelly media, although the procedure is laborious, requires a delay in diagnosis, and has a relatively low sensitivity (17).

Lyme disease can be staged or classified based upon the scope of disease activity. Early Lyme disease consists of the erythema migrans rash with or without lymphadenopathy and has an excellent prognosis with appropriate antibiotic therapy. Early disseminated disease consists of disseminated erythema migrans lesions with early manifestations of neurologic, cardiac, or rheumatologic involvement. The prognosis is excellent with longer-term administration of antibiotics. Chronic or late Lyme disease is associated with persistent or remitting neurologic, rheumatologic, or cardiac manifestations. The neurologic manifestations can include chronic depression, dementia, fatigue, and encephalopathy producing hemiparesis and ataxia. These symptoms develop in approximately 5% of untreated patients and may prove refractory to antibiotic therapy. Rheumatologic symptoms include intermittent episodes of asymmetric mono- or polyarthralgia and migrating musculoskeletal pain. Joint swelling may also be seen. The cardiac manifestations include atrioventricular conduction disturbances, myocarditis, pericarditis, and heart failure. Each of these complications may eventuate in death.

The treatment of uncomplicated Lyme disease involves the oral administration of either amoxicillin 500 mg t.i.d. or doxycycline 100 mg b.i.d. for 14 to 21 days. Complicated, disseminated, or chronic cases may be treated with the same regimen for 30 to 60 days or with intravenous ceftriaxone for 14 to 30 days. 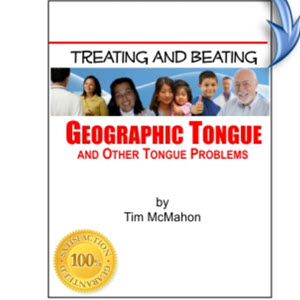 Treatment of the Erythema and Flushing of Rosacea